Read on for the solution to Challenge #1… but give it a try first if you haven’t already!

So let’s find a value for that strange infinite beast from Challenge #1, which is known as an infinite continued fraction.

We’ll start by using a time-tested problem solving technique: NAME AND CONQUER. (In other words, one of the first steps toward getting a handle on a difficult or complex expression is often to simply give it a name.) Let’s call our infinite continued fraction x:

And now for the “creative leap” I hinted at in the challenge: notice that if we look only at the expression in the denominator of the first fraction, it looks like this:

But wait a minute! That’s just the same thing as x itself. In other words, x seems to contain entire copies of itself as subparts! Since the denominator of the first fraction is equal to the expression as a whole, we can replace the denominator by x, like this:

You can see why it was so helpful to give our expression a name! Now we can proceed to solve for x. First, we multiply both sides of the equation by x:

Now, moving everything to the left side, we get a quadratic equation which we can solve using the quadratic formula:

, is the one we want — this is the “value” of the infinite continued fraction. One way to think about this is that if you try various “stopping points” you will see that the values you get seem to be getting closer and closer to 1.618 (more on this later): 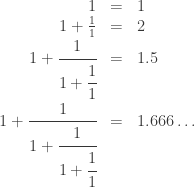 and so on. It turns out that this is actually a very famous — and beautiful — number with a special name: the golden ratio, or sometimes the golden mean. It is so special and famous that it has its own special symbol, phi (pronounced “fie”, not “fee”), which looks like this:

. (Phi is the twenty-first letter of the Greek alphabet.)

In subsequent posts I’ll explore some of the reasons that the golden ratio is such a beautiful and famous number — it shows up in a lot of different places, some quite unexpected! See Challenge #2 for more infinite expressions to evaluate…