Let’s dig a little deeper behind the solutions to Challenges #1 and #2. What on earth does it mean for an infinite expression to have a “value”? Well, as noted in the solution to Challenge #1, what we’re really talking about is the value of the expression at various “stopping points” along the way: what happens to these values as the stopping points get further and further along?

So, for example, the expression from Challenge #1 can be written as

, and the second expression from Challenge #2 can be written as

(note there are no ellipses) means

Now, let’s analyze various “stopping points” along the way to the infinite expression 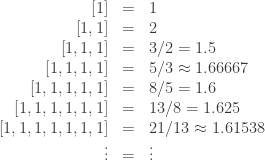 (Try confirming these values for yourself.) As you can see, it seems like these numbers are getting closer and closer to something… here’s a graphical view of what’s going on:

The red squares indicate the stopping-point values that we calculated: the leftmost square (in the bottom left) is the value at the first stopping point, and the values progress to the right. It’s easy to see that they seem to be quickly zooming in on a particular value (indicated by the horizontal blue line), somewhere around 1.62.

Note also that this is why the “value” of

is “infinity”. If we look at the value at successive stopping points (i.e. 1, 1+1, 1+1+1, etc.), they are not getting closer and closer to anything; they are simply getting bigger and bigger:

Saying that the value of something is “infinity” is really just a shorthand way of saying that it does not converge to anything (it diverges).

So when we ask for the “value” of the infinite expression

, we are really asking: what do the stopping point values converge to?

There is much, much more going on here as well… but that will have to wait for another post. As always, feel free to comment with questions, ideas, comments, or anything at all (except spam).