Penrose tiles on my refrigerator!

I got some Penrose refrigerator magnets in the mail the other day! They look nice on my fridge, don’t you think? 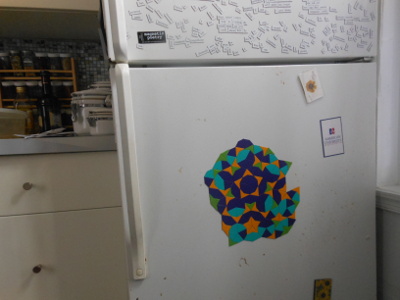 (Unfortunately, since this was just a Kickstarter project there’s no way to order more at this point.)

There are just two types of tile (ignoring the colors), both quadrilaterals, one a “kite” shape with three angles of 72 degrees and a fourth angle of 144 degrees, and the other a “dart” shape with angles of 36, 72, 36, and 216 degrees. You can use them to completely tile the (infinite) plane with no gaps or overlaps—and in a way that is aperiodic. By that we mean that the tiling has no translational symmetry, that is, there is no way to translate the tiling so that it matches up with itself. In fact, if you follow a couple simple rules in the way that you are allowed to put the tiles together, it forces the resulting tiling to be aperiodic. Pretty cool! Though as I learned from playing with the tiles, you can’t just put the tiles together any way you like, even following the rules—sometimes you get stuck and have to backtrack to find an arrangement that works, which makes it a rather engaging little game. (In fact, now that I look at it more closely I think I made a mistake in the picture above—can you spot where the tiling is going to go wrong?) Though you can no longer get them as refrigerator magnets for now, you could certainly cut your own tiles out of card stock or something like that.

The Wikipedia article on Penrose tilings has a lot more information about this and related tilings.

6 Responses to Penrose tiles on my refrigerator!