[This is part six in an ongoing series; previous posts can be found here: Differences of powers of consecutive integers, Differences of powers of consecutive integers, part II, Combinatorial proofs, Making our equation count, How to explain the principle of inclusion-exclusion?. However, this post is self-contained; no need to go back and read the previous ones just yet.]

(Actually, I’m only going to begin explaining it today; it’s getting too long for a single blog post!) In any case, the overall goal is to finish up my long-languishing series on a combinatorial proof of a curious identity (though this post is self-contained so there’s no need to go back and reread that stuff yet). The biggest missing piece of the pie is… well, PIE! I’ve been having trouble figuring out a good way to explain it in sufficient generality—it’s one of those deceptively simple-seeming things which actually hides a lot of depth. Like a puddle which turns out to be a giant pothole. (Except more fun.)

In a previous post (now long ago) I asked for some advice and got a lot of great comments—if my explanation doesn’t make sense you can try reading some of those!

So, what’s the Principle of Inclusion-Exclusion all about? The basic purpose is to compute the total size of some overlapping sets.

To start out, here is a diagram representing some non-overlapping sets. 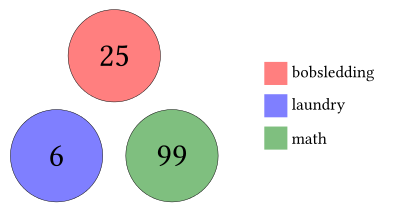 Again, I’ve labelled each region with the number of elements it contains. So there are two people who like bobsledding but not math or laundry; there are three people who like bobsledding and math but not laundry; there is one person who likes all three; and so on. It’s still easy to count the total number of elements: just add up all the numbers again (I get 14).

So what’s the catch?

The catch is that in many situations, we do not know the number of elements in each region! More typically, we know something like:

This is illustrated below for another instance of our ongoing example. The top row shows that there are sixteen people who like bobsledding in total, eleven who like laundry in total, and eighteen who like math—but again, these are total counts which tell us nothing about the overlap between the sets. (I’ve put each diagram in a box to emphasize that they are now independent—unlike in the first diagram in this post, having three separate circles does not imply that the circles are necessarily disjoint.) So

The question is, how can we deduce the total number of people, starting from this information?

Well, give it a try yourself! Once you have figured that out, think about what would happen if we added a fourth category (say, people who like gelato), or a fifth, or… In a future post I will explain more about the general principle.