Recently I have been on a sort of kick making physical mathematical objects. First, inspired by this post on mathcraft.wonderhowto.com, I’ve learned how to fold origami Sonobe units and assemble them into various polyhedral things. So far, I’ve made a cube out of 6 units: 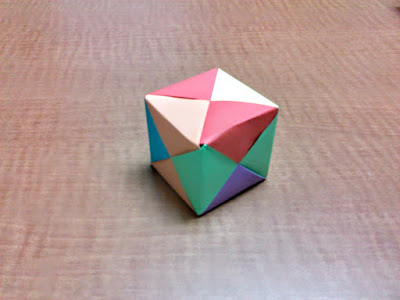 And I made a stellated octahedron using 12 units. Here’s a face-on view, with threefold symmetry: 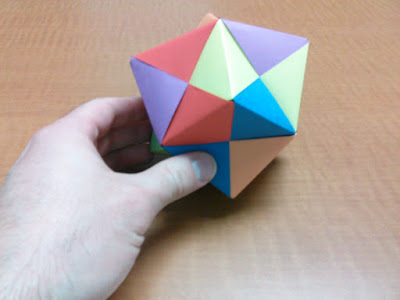 And here’s a vertex-on view, with fourfold symmetry: 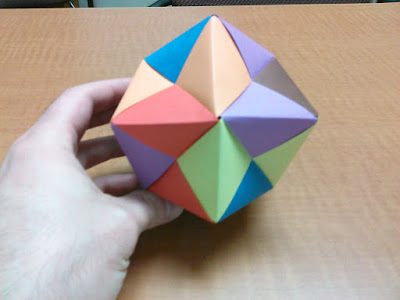 (I didn’t take an edge-on picture, which would have twofold symmetry.) At some point I will also make a stellated icosahedron out of 30 units. I’ve only seen discussions of making those three platonic solids, though off the top of my head I don’t see any reason why you couldn’t also make a stellated dodecahedron (I’m less sure about a tetrahedron). I will have to think about it. In any case, I have also borrowed Origami Omnibus, by Kunihiko Kasahara from my colleague Mark Goadrich and look forward to trying to fold a few of the many mathematical objects in there.

But folding things will have to wait—after finally making it to Target to get the appropriate kind of bendy straws, my current project is to make a Straws Thingy, as described last month by Zachary Abel! Here’s a picture from Zachary’s blog; I’ll post my own picture once I finish making one.