Suppose there is an

rectangle. I like to think of it as one of those bars of chocolate made up of squares:

Two players take turns. On a player’s turn, she must break the chocolate bar along any one of the horizontal or vertical lines, and eat the smaller piece (eating the bigger piece would be very rude). [Edited to add: if the pieces are equal, they may eat either piece.] The player who is left with a

piece of chocolate, and hence cannot make another move, loses the game. (At least they get to eat the last piece of chocolate.) For example, given the above bar of chocolate, the first player has eight possible moves: she could break it along any one of the 5 vertical lines, or along any of the 3 horizontal lines. However, since she always has to eat the smaller half, some of these moves are really the same. For example, it does not make a difference whether she breaks off and eats the four leftmost squares or the four rightmost squares; in either case her opponent will be left with a

Here is an equivalent formulation of the same game: there is a pet store with

cats. Players alternate turns. On a player’s turn, she must decide to buy either some cats or some dogs; once she makes her choice she may buy any number up to, but not exceeding, half the pet store’s inventory of that animal. For example, if the store has 3 cats and 6 dogs, then a player may buy 1 cat, or they may buy 1, 2, or 3 dogs. The loser is whoever’s turn it is when the pet store has only one cat and one dog remaining (since then they are not allowed to buy any).

First, explain why these games are the same.

I actually wrote about this a long time ago (I’m finally getting back around to following up!). In that post I explained how we can visualize the game like this: 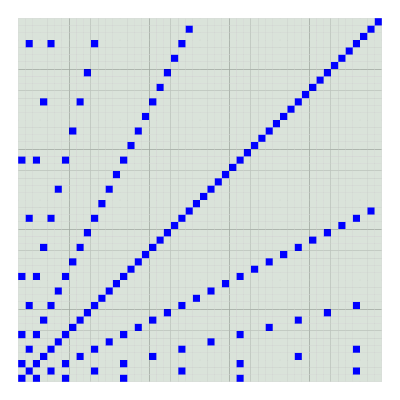 (If some of the grid lines appear heavier than others, pay no attention; it is just a rendering artifact.) The square with position

(the bottom left is

) represents the game state with an

rectangle, or a store with

The losing positions in this visualization of the chocolate bar game appear to be arranged in lines whose slope are a (positive or negative) power of two. For example, the central diagonal has a slope of 1; the next line down has a slope of

Now, can you explain why the picture looks like this?

Apparently this problem comes from the 2005 International Olympiad in Informatics. There is a full solution on that site, but it is much too complicated! Of course I will reveal my own solutions in some future posts. Until then, happy solving. Feel free to post comments, questions, partial or full solutions, etc., in the comments (so conversely, don’t look at the comments if you don’t want any spoilers!).

6 Responses to The chocolate bar game