piece of chocolate, instead of losing? Well, that game can be visualized like this:

As you can see, it actually has a lot of the same structure, but it’s as though some rows and columns got shuffled around. Can you explain this?

And here’s what happens if we keep the rules of the original chocolate bar game, but arbitrarily declare that

is also a losing position (though not

). As I suspected, overall we can still see the same sort of structure of radiating diagonal lines, but with some extra complication thrown in. The result is of course not symmetric.

Zooming out, we can see sequences of dots lying above lines with corresponding dots missing—but not at a fixed distance; the dots seem to come in groups of three that are the same distance away from the line, and evenly spaced from each other; and then the next three are farther away from the line and spaced farther apart, and so on. If true, this is actually very surprising to me; I have no idea where the number

would be coming from! 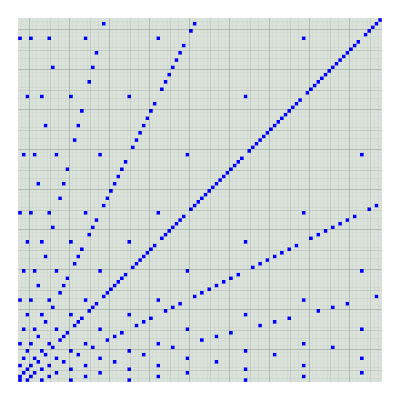 And here’s what we get if we instead arbitrarily declare 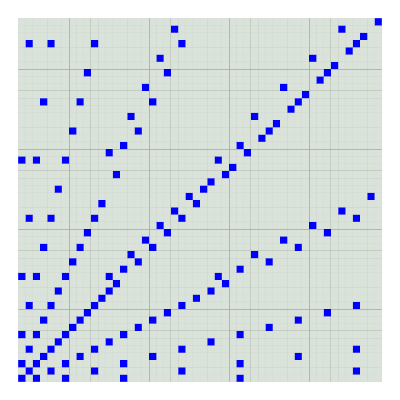 Here is another view of the same game (with losing position

added), zoomed out twice as far. It looks like it settles into a regular pattern, with the same overall shape as the original game but with some “fuzz”. The fuzz seems to follow some very interesting patterns—zooming even farther out is probably necessary to get a better sense for them!

Interestingly, if we add

along with its mirror image

In this zoomed-out view of the same game, you can see that there will be periodic disturbances, occuring at exponentially increasing distances.

Unlike the chocolate bar game, I have no idea of the right strategy for any of these variants! But I think at least some of them—particularly the reversed form where

is winning rather than losing—probably have a nice mathematical characterization. I would also really love to see an explanation of why dots in groups of

show up when we introduce

as an extra losing position. Thoughts, comments, etc. welcome! I’m also happy to generate visualizations for other variants you might want to see.