Complex multiplication and roots of unity

If played around with the question from my previous post, you probably found something like the following: 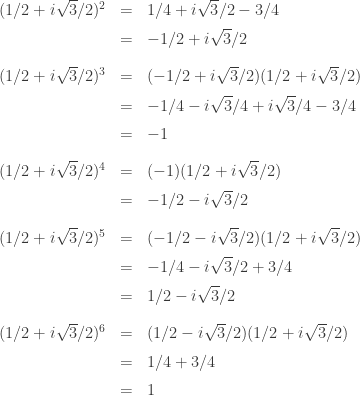 That is, as the powers of

, if we continue taking higher powers after that we will just get the same values repeated.

-circle. If we plot its powers, we find that they are exactly the other spokes of the

-circle! Every time we multiply by

, we seem to rotate around the circle

of the way. What’s going on?

As it turns out, there’s nothing magical about these particular values—this is just how complex multiplication works! Plot any complex number and connect it to the origin with a straight line. This line has a certain length and makes a certain angle with the positive

-axis (this length and angle are respectively called the magnitude and argument of the complex number, but I won’t use these terms in the rest of the post).

When we multiply two complex numbers, these lengths and angles combine in a particularly nice way: the lengths multiply, and the angles add. 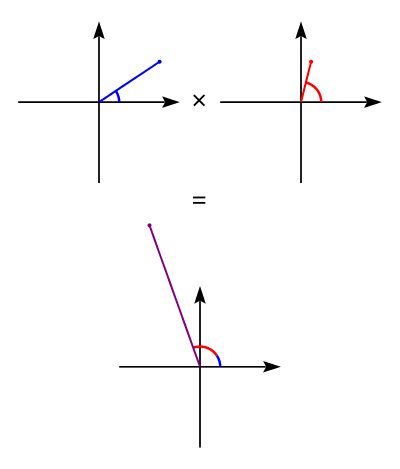 -axis is the sum of the blue and red angles. We’ll prove this in another blog post, but for now, let’s assume it’s true and see what the implications are for our spokes.

When a complex number is located on the unit circle, then its distance from the origin is 1, so multiplying it by another complex number does not change the length at all (since the lengths multiply, and multiplying by 1 is the identity). All it does is add the angle, that is, it rotates.

, which is located on the unit circle at an angle of

, that is, one-sixth of the way around the circle (

is the fundamental circle constant, the ratio of a circle’s circumference to its radius). Squaring it thus produces another complex number at a distance of 1 from the origin, and an angle of

, one-third (two-sixths) of the way around the circle. Every time we multiply by another factor of

, we rotate another sixth of the way around. This is why the powers of

are evenly spaced around the unit circle.

Now, notice that when we take the sixth power of

, we rotate all the way around to the

-axis, and we get

is a sixth root of

. In fact, all the powers of

are sixth roots of

You should take a minute to make sure you understand why this is true. For example, what happens if you start with the complex number one-third of the way around the circle (that is,

), and multiply it by itself six times? After squaring it, we are two-thirds of the way around… after cubing it, we are three-thirds around, that is, at

You are surely familiar with the fact that

. You might even be familiar with the fact that

. But in general, now that we understand how complex multiplication works via rotation, we can see that

th roots, which are evenly spaced around the unit circle, at the ends of the dotted spokes in our pictures!

4 Responses to Complex multiplication and roots of unity