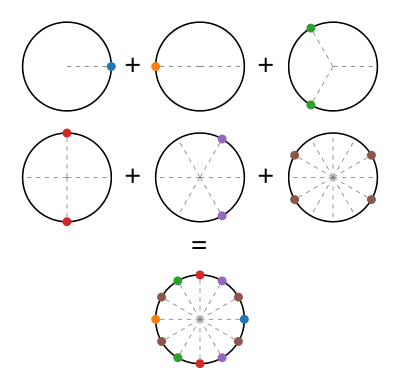 It, and other pictures like it, express the fact that for a given

, if we take the primitive roots for each of the divisors of

, together they make up exactly the set of all

th roots of unity. The above picture is for the specific case of

(the dots on each of the top circles). I proved this in another post.

Of course, if two sets of complex numbers are the same, then their sums must also be the same. Let’s write

for the sum of all the primitive

th roots: in my previous post we worked out

but weren’t sure how to compute it in other cases. Well, today that’s going to change!

We already know by symmetry that the sum of all the

th roots of unity is zero, except when

in which case the sum is

. Putting all of this together,

That is, the sum of all

th roots of unity is the same as summing the primitive roots,

, so the summation symbol with

underneath means we are summing over all divisors of

So what have we gained? Well, we can use this equation “backwards” to compute values for

And so on. Since each value of

can be computed in this way once we know

for all the divisors of

(which are smaller than

), we can continue filling in a table of values of

For example, to fill in

Do you notice any patterns? It is not too hard to see that

must always be an integer (why?), but so far it has always been either

further and exploring these questions yourself!