In my last post, I introduced the Möbius function

, which is defined in terms of the prime factorization of

Previously, we also considered the sum

of all the primitive

th roots of unity. Today, we will begin proving they are the same:

! This is surprising since it is not immediately obvious what the two functions have to do with each other: one is about sums of complex numbers, and the other is about prime factorization. On the other hand, perhaps it is not all that surprising after all: we’ve already seen that primitive roots of unity have a lot to do with divisibility and prime factorization. In any case, this connection is the key that cracks open a lot of really cool mathematics.

So, how will we do it? Recall that we proved

In the case of

this was fairly “obvious”: we proved it essentially by staring at some pictures. But we will show that

also satisfies this equation, that is,

, this is not so obvious! But it’s true, and we will prove it.) Given a starting value for

, we have seen that this equation uniquely determines all values of a function for

, we can use the equation to uniquely determine

, we can then uniquely determine

both satisfy this equation, they must be the same for all

as long as they have the same starting value—and they do, since

I have to say that this is one of my favorite proofs—it rests on a beautiful little combinatorial argument, and, as we’ll see, it gives some insight into the Principle of Inclusion-Exclusion as well. We’ll start the proof today and then see the really beautiful part in my next post. So, without further ado:

, we can already see that

as desired. So now consider

; we wish to show this sum is zero.

which are divisble by a perfect square, those values of

contribute nothing to the sum. We can therefore concentrate on only those

which are not divisible by a perfect square (we call such numbers squarefree). Each squarefree

must be a product of distinct prime factors, since if any prime factor was repeated, then

would be divisible by a perfect square. Since

, the prime factorization of each squarefree

, and conversely, each subset of the distinct prime factors of

. Each squarefree divisor of

can have at most one copy of each of

, one corresponding to each subset of 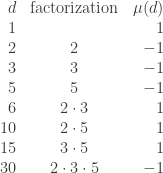 Adding up all the values of

listed in the right column, we can see that there are four

’s, which cancel to yield

As another example, for

, all of the divisors of

are squarefree: we have

Our goal is to show that this sum is always zero, and the only way for it to be zero is if there are always an equal number of

’s. Given the definition of

, we know that the

The fact that these are sets of distinct prime factors really makes no difference, since we are just counting them. What we really need, in essence, is the following lemma:

Can you see how to prove this? (And as an aside, do you see why it is false if we exclude the word “nonempty”? Do you see what this has to do with the

cases?) My next post will explain a nice proof of the lemma and then conclude the proof that