, that is, the Möbius function

is the inverse of

with respect to Dirichlet convolution. This directly leads to an interesting principle called Möbius inversion.

as the sum of another function

over all the divisors of

Then we can “invert” this relationship to express

as a sum over

The above is the “traditional” way of stating the principle, but I like to write it in this equivalent, more symmetric way:

where, as usual, the sum is over all factorizations of

. This is the same as the previous equation, because

if and only if

. But now it becomes more clear that we are dealing with a Dirichlet convolution. Can you see how to prove this?

Proof. If we think in terms of Dirichlet convolution, the proof is almost trivial. Note first that saying

is the same as saying

(recall that taking the Dirichlet convolution with

is the same as summing over all divisors). We can then take the Dirichlet convolution of both sides with

In other words, Möbius inversion is really just saying that if

is the inverse of

Let’s try an example! Recall that

denotes the Euler totient function, which counts how many positive integers less than or equal to

are relatively prime to

since all the positive integers less than or equal to

itself) are relatively prime to it, and more generally

since the only positive integers between

which are relative prime to

. In a previous post we considered a visual proof that

For example, as seen in the picture above,

Now, this is in the perfect format to apply Möbius inversion: the sum over all divisors of the function

is equal to the function

. So we conclude that

which is interesting since it expresses

as a fraction of

Let’s use this to compute

The prime factorization of

for any divisor with any repeated factors, so those all cancel out; we only need to consider divisors which correspond to subsets of

is the same example we used in our proof of the key property of the Möbius function.) So 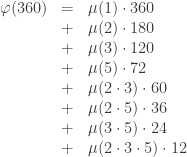 for an even number of prime factors and

for an odd number, we can evaluate this as

(and we can use e.g. a computer to verify that this is correct). Note how this works: we start with

and then subtract out all the numbers divisible by

of them), as well as those divisible by

). But now we have subtracted some numbers multiple times, e.g. those which are divisible by both

. So we add back in the numbers which are divisible by

). Finally, we’ve now overcounted numbers which are divisible by all three, so we subtract off the

numbers which are divisible by

. Egad! This seems really similar to PIE! Indeed, this is no accident: it turns out that the Principle of Inclusion-Exclusion is really just another kind of Möbius inversion. But that’s a subject for another post!