; and so on. This is much more efficient than computing powers by repeated multiplication: for example, we need only three multiplications to compute

by squaring, but we would need seven multiplications to compute it as

The question I left you with is whether we can use a similar technique to compute other powers which are not themselves powers of two. The idea is that in addition to squaring, we can also multiply by another copy of

at strategic points. For example, suppose we want to compute

? And can we get any exponent this way?

It becomes easier to answer these questions if we think recursively. Instead of starting with

and building up to

, let’s start with our goal of computing

and see how to break it down into subproblems we can solve.

So suppose we’re trying to compute

. There are two cases, depending on whether

is even or odd. If

is even, all we have to do is compute

; then we can square it to get

is odd? Then we can compute

; squaring it gets us

; then multiplying by one more copy of

For example, let’s rethink our example with

is even, so our goal is to compute

; we can then square that to get

. So how do we compute

is odd, we can get it by squaring

one more time. To compute

, we want to square

and multiply by another

. The base case of the recursion is when

, at which point we can stop:

as an even simpler base case:

. (Do you see how we will still get the right answer for

is not a base case?)

As you may have already noticed, we can think of this in terms of the binary expansion of

is even or odd is determined by its final bit:

is even when the final bit is

, and odd when the final bit is

is odd) corresponds to chopping off the final bit of

. So what we’re really doing is chopping off one bit of

at a time, squaring at each step and multiplying by an extra copy of

when we see a

. Since the final bit is

, this tells us that we want to compute

and then square it. Since the final bit is now

, this in turn means that we want to compute

, square it, and multiply by

; and so on. So here is an equivalent way to write our algorithm as a loop:

Here’s a visualization of the operations needed to compute 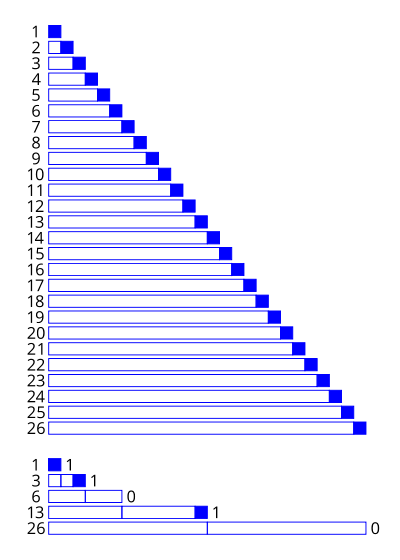 Obviously, using the repeated squaring approach requires a lot fewer multiplications! But how many does it take, exactly? The loop repeats once for every bit of

, and each time through the loop, we do either one or two multiplications. The number of bits in

; so in the worst case we do twice that many multiplications, that is,

. (This worst case happens precisely when

is one less than a power of two, that is, when its binary expansion consists of all

. Assuming that we can do

by repeated multiplication would take a minute and a half. So how about by repeated squaring? In that case it will take at worst

by repeatedly multiplying by

takes ten billion multiplication operations, but computing it by repeated squaring takes only thirty-five! (Actually it will take even less than that, since the binary expansion of

does not consist of all

’s—can you figure out exactly how many multiplications it will take?) I need hardly point out that if we can do

will take hardly any time at all (about 1/3 of a microsecond; in that amount of time, light travels only about

Obviously this makes a huge difference. And

by repeated multiplication would require

per second this would take

seconds, which is vastly, unimaginably longer than the estimated age of the universe (which is “only” about

seconds). Even if you expanded every microsecond in the history of the universe to take an entire age of the universe—and then repeated this process 20 times—you still wouldn’t have enough time! But what about with repeated squaring? Well,

One thousand seven hundred multiplications, at

(One thing I have been sweeping under the rug a bit is that not all multiplications take the same amount of time, so if you just want to compute

, the multiplications will take longer and longer as the numbers become larger; saying that we can do

multiplications per second is only true if the numbers involved are less than, say,

. Not only that, but the results might be gigantic: for example, as far as we know there isn’t enough space in the entire universe to even write down the result of

, even if we could somehow write one digit on each atom! Everything I’ve said is justified, however, by the fact that we actually want to compute something like

at each step, then all the multiplications really do take the same amount of time, and we don’t have to worry about the result getting astronomically large.)