The binary algorithm is the most efficient way to build

using only doubling and incrementing steps. That is, any other way to build

by doubling and incrementing uses an equal or greater number of steps than the binary algorithm.

Someone posted a very nice, relatively short proof in the comments, which was quite different from the proof I had in mind. Maybe I’ll write about it in another post, but for now you can go read it for yourself.

In this post I’d like to present the proof I had in mind, which has a more constructive/computational flavor. Let’s use the digit

to represent an increment step, and the digit

’s thus corresponds to a natural number, namely, the one we get if we start from zero and execute all the steps from left to right. Let’s denote this number by

is the same as the number of steps it represents. For example,

Now, it turns out that

is not the most efficient way to generate

. In looking at this and other examples of such non-optimal sequences, what stuck out to me is that they all seemed to contain consecutive increment operations. For example, in the case of

’s are used in the middle to go from

. But if we had just incremented once first (going from

), then doubling would get us to

right away; the effect of the one increment is “magnified” by the subsequent doubling. Formally, we can say that

(a double followed by two increments) can always be replaced by

(an increment followed by a double), because

What if we keep doing this operation—replacing

—as much as we can? It turns out that by doing this we can always transform any sequence into an equivalent one the same length or shorter which has no consecutive

’s. This is the idea behind the first lemma.

Lemma 1. Given any sequence

, there exists a sequence

In other words, for any sequence we can always find an equivalent, shorter (or at least not longer) sequence with no consecutive

Proof. By induction on the number of

Let’s look at an example. Suppose we start with the most inefficient way possible to represent

consecutive increment steps. Then the lemma above says we can find an equivalent, shorter sequence with no consecutive

’s. Moreover, the proof is actually constructive, that is, it does not merely assert that such a sequence exists, but gives us a concrete way to compute it. The proof outlines a recursive rewriting process which we can visualize as follows: 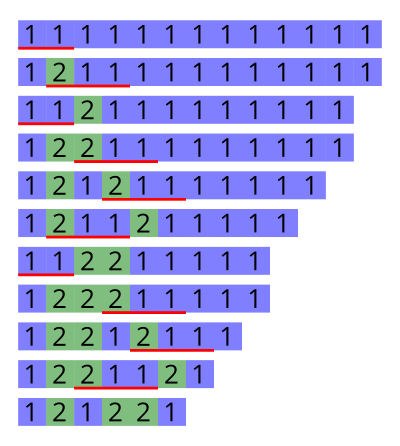 The red underline shows the part that is going to be rewritten at each step. Notice how the length either stays the same or decreases at each step, and how the number of

’s decreases at each step. In fact, either a

gets deleted and the number of

is replaced by a

when there are two

’s at the leftmost position. This is the only way new

’s are generated. So

’s are “born” at the left end from a pair of

’s, and then they spend the rest of their life slowly “migrating” to the right.

Let’s try starting with a different representation of 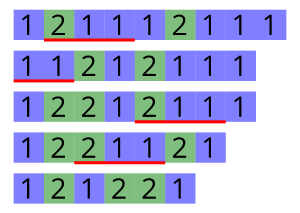 Curiously, it seems that the process ends with the same sequence (

’s. Could this just be a coincidence?

Well, the fact that I’m even asking the question kind of gives away the answer: it’s no coincidence. In fact, for a given

, if you start with any sequence representing

Lemma 2. For every natural number

, there is a unique sequence

Proof. By (strong) induction on

Finally, putting the pieces together: notice that the sequence generated from the binary representation of

’s, since each bit always generates a

, which is optionally followed by a

. Since by Lemma 2 we now know that such representations are unique, the process explained in the proof of Lemma 1 must actually result in this same unique sequence corresponding to the binary representation of

. Since this process results in a sequence which is no longer than the starting sequence, this means that every sequence of steps representing