Fermat witnesses and liars (some words on PWW #24)

be a positive integer we want to test for primality, and suppose

is some other positive integer with

. There are then four possibilities:

The question becomes: for a given composite

, how many Fermat liars and Fermat witnesses could there be? How many values of

do we have to test to be “reasonably sure” whether

is prime or composite?

pair. Each row represents a value of

, with the top row corresponding to

and the bottom row to

. Each column represents a value of

. Of course we only consider pairs

, which explains the triangular shape. (I include the case

to complete the triangle, although these are not interesting from a primality testing point of view.)

The four cases outlined above correspond to the four colors:

Here’s a much smaller sample of the same visualization so we can see more clearly what’s going on. 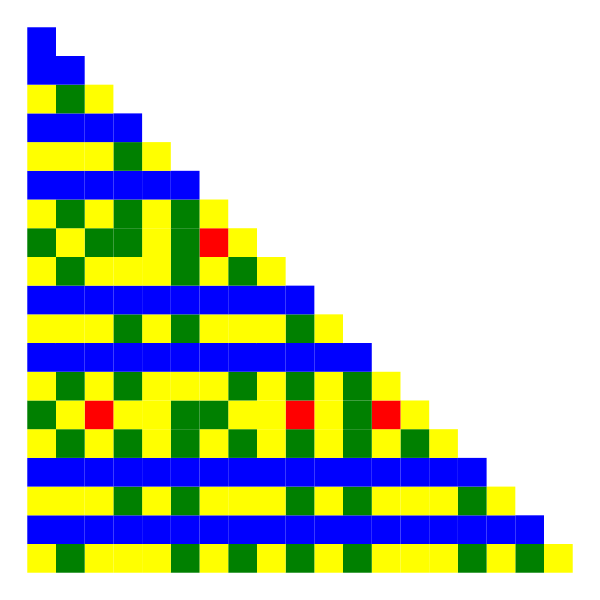 to see whether it is prime corresponds to picking random squares from its row: if we hit a yellow or green square, we learn immediately that

is composite. If we hit a red square or a blue square, we aren’t sure. So far, however, things don’t look too bad: there are only a few isolated red squares, so picking two or three random values should be enough to ensure that we either find out

is composite, or can safely assume that it is prime. Let’s continue the picture a bit farther; here are the first 100 values of

I’ve also included some purple bars to the left of each row, showing what proportion of the numbers relatively prime to

). It turns out there’s a good reason for this:

is composite and there exists at least one Fermat witness for

, then at least half of the numbers relatively prime to

Some questions for you: