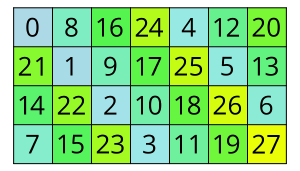 And then in the next post I explained how I made the images: starting in the upper left corner of a grid, put consecutive numbers along a diagonal line, wrapping around both from bottom to top and right to left. The question is then why some grids get completely filled in, like the one above, and why some have holes, like this: 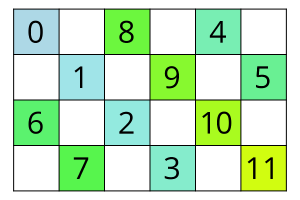 Commenter ZL got the right answer: the grid will be completely filled in if and only if the width and height of the grid are relatively prime.

then as long as

are relatively prime, there is a unique solution for

Here’s another way to think about this. Suppose I have a number

. If I tell you only

, that is, the remainder when dividing

, you can’t tell for sure what

is; there may be multiple possibilities for

. Likewise, if I only tell you

. But if I tell you both—as long as

; there is only one value of

which has a certain remainder modulo

and at the same time a certain remainder modulo

which sends an integer

and the second is in the range

. If we use the notation

then we can write this concisely as

The Chinese Remainder Theorem just says that this function is actually a bijection, that is, it is onto (every pair

is exactly what the grid diagrams are visualizing! We start at

in the upper left, and every time we step to the next value of

, we take a step down; so in general the number

(if we number the rows starting with row

at the top)—except that we wrap around when we get to the bottom. So if there are

. Similarly, we take a step to the right with each next value of

, and wrap around; so

will be in column

will end up at grid coordinates

, which is exactly the function

being a bijection is exactly the same thing as the grid being completely filled in: every value of

corresponds to a different grid square, and every grid square has a value of

In my next post I’ll go over a simple proof of the theorem.

3 Responses to More words about PWW #25: The Chinese Remainder Theorem