About six months ago I wrote about the recent discovery that 33 can be written as the sum of three cubes. At that time, the only remaining number less than 100 whose status was still unknown was 42. And just recently that, too, has fallen: thanks to Andrew Booker and Andrew Sutherland, we now know that

Again, this was very difficult to find (it required 1.3 million hours of computer time!) but very easy to verify: you can plug the above numbers into a computer yourself and see that you get 42. In fact, I’ve set up some links here so you can try it yourself using either Wolfram Alpha or Python. (Sadly, most graphing calculators don’t have enough precision to represent these numbers exactly. But seriously, click one of the links above and try it out!)

I still don’t understand the math behind the algorithm Booker and Sutherland used (I tried reading the paper but quickly got lost, and my sense is that I would probably have to spend at least several months doing background reading to be able to understand it). But this time around I’ve been learning more about the sums of three cubes problem itself. Today I’ll write a bit about which numbers actually have a hope of being written as a sum of three cubes, and in a future post I plan to write about numbers that have multiple representations as sums of cubes.

For the rest of this post I’m going to use the word tricubic to refer to numbers which can be written as a sum of three cubes. So, for example, we now know that

is tricubic. I’ll also say tricubic sum to refer to three cubes that add up to a given number, for example, “

is a tricubic sum for

Some numbers definitely aren’t tricubic: for example, 13. How did I know that? The key is to look at the remainders of cubes 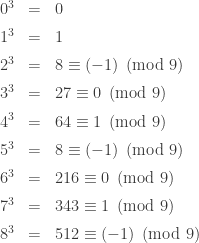 . And since every integer is equivalent,

, to one of the numbers from

, you can get any remainder between

, inclusive. But that leaves out exactly two remainders you can’t get:

is four more than a multiple of

OK, so now we know that any number either 4 or 5 more than a multiple of 9 is not tricubic. What about other numbers? Maybe if we look at remainders modulo some other divisor, say,

, we can rule out other numbers in a similar way? Actually, no! So far it seems like this simple restriction is the only restriction on tricubic numbers: the conjecture is that every number not of the form

is tricubic—but right now this is only a conjecture; no one has yet managed to prove it!

So, in general, numbers fall into three groups:

Where do we go from here?

Progress on this problem could theoretically come in a lot of different ways.

First, someone could prove that there are additional numbers which are not tricubic. But as far as I can tell, everyone thinks this is pretty unlikely.

Someone could find a way to write some additional numbers as sums of three cubes. For example, the smallest number whose tricubic status we don’t currently know is

as a sum of three cubes. However, the amount of computer time necessary to search for these may get prohibitively large: as I mentioned earlier, finding a tricubic sum for

required 1.3 million hours of computer time. Note, however, that finding

was possible specifically because Andrew Booker came up with a better algorithm than what had been used before. So perhaps someone will come up with an even better algorithm that makes it feasible to search for larger tricubic sums. At some point, however, people will lose interest: finding bigger and bigger tricubic sums just gets boring after a while.

Someone could prove that every number not of the form

is tricubic by finding an algorithm which takes a number

as input, and spits out a tricubic sum for

. But wait, you ask, don’t we already have that? Weren’t

found using an algorithm? Well, yes, but the search algorithm used to find tricubic sums for

was not guaranteed to find anything. You give it an upper limit for the size of the cubes involved, and it will search everything below that, but there is no guarantee that it will find what it is looking for. You could easily modify the program to run as follows: given a number

I don’t actually find the above scenario very likely (though a dramatic example of this kind is the recent proof that every positive integer is a sum of three palindromes). I find it more likely that someone will prove that every number not of the form

is tricubic, but in a way that is non-effective. That is, we would know that every suitable number must be tricubic, but the proof would not actually give us a way to find a tricubic sum for any given

. (There is a very interesting distinction here between classical and constructive mathematics; maybe I’ll write more on this in a future post!)