Continuing from my last post in this series, we’re trying to show that

Recall that we defined

as the set of all functions from a set of size

blue dots) to a set of size

yellow dots on top of

blue dots) such that the blue dot numbered 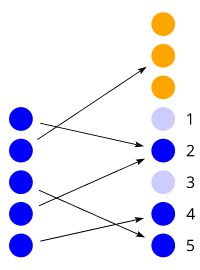 As an example, the function pictured above is an element of

, as well as an element of

. (That means it’s also an element of the intersection

—this will be important later!)

be the set of all functions from

be the set of “good” functions, that is, the subset of

consisting of matchings (aka Permutations—I couldn’t use

is already taken!) between the blue sets. We already know that the number of matchings between two sets of size

. However, let’s see if we can count them a different way.

Every function is either “good” or “bad”, so we can describe the set of good functions as what’s left over when we remove all the bad ones:

(Notice how we can’t just write

sets overlap! But if we union all of them we’ll get each “bad” function once.)

In other words, we want to count the functions that aren’t in any of the

. But this is exactly what the Principle of Inclusion-Exclusion (PIE) is for! PIE tells us that the size of this set is

that is, we take all possible intersections of some of the

, and either add or subtract the size of each intersection depending on whether the number of sets being intersected is even or odd.

We’re getting close! To simplify this more we’ll need to figure out what those intersections

are exactly those functions which are in both

contains all the functions that are missing both

(and possibly other elements). Likewise,

contains all the functions that are missing (at least)

Last time we argued that

, just by deleting or inserting element

So what about an intersection—how big is

)? By a similar argument, it must be

, since we can match up each function in

with a function from

: just delete or insert both elements

Generalizing, if we have a subset

and intersect all the

, we get the set of functions whose output is missing all the elements of

, and we can match them up with functions from

Notice that the value of

depends only on the size of the subset

So for each particular size

, we are adding up a bunch of copies of the same value

—as many copies as there are different subsets of size

. The number of subsets

, the number of ways of choosing exactly

. Therefore, if we add things up size by size instead of subset by subset, we get

But this is exactly the expression for

that we came up with earlier! And since we already know

And that’s essentially it for the proof! I think there’s still more to say about the big picture, though. In a future post I’ll wrap things up and offer some reflections on why I find this interesting and where else it might lead.