The First Six Books of the Elements of Euclid, by Oliver Byrne (Taschen) 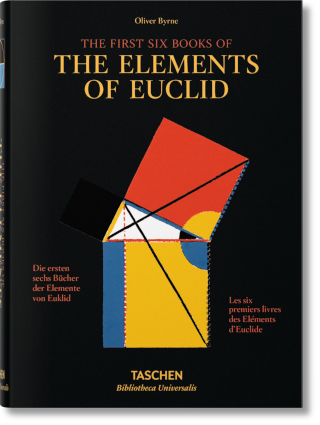 Recently for my birthday I received a copy of Oliver Byrne’s 1847 edition of Euclid’s Elements (pictured at right), republished by Taschen Books in 2010. I’ve only just started reading it, but it’s beautiful and fascinating. Oliver Byrne was a 19th-century civil engineer and mathematician, best known nowadays for this incredible “color-coded” edition of Euclid. Euclid’s Elements, of course, is the most successful and influential mathematics textbook of all time, widely used as a geometry textbook even up into early 1900’s. Nowadays hardly anyone reads the Elements itself, but its content and style is still widely emulated. In 1847, Oliver Byrne decided to make an English edition of the Elements that not only used colored illustrations, but actually used color-coded pictures of lines, angles, and so on, inline in the text itself to refer to the picture instead of using the traditional points labelled by letters (see the example below). I can’t imagine how much work went into designing and printing this in the mid-1800s. I guess there would have to be four engraved plates for every single page? In any case, it’s beautiful, creative, and surprisingly effective. I spent a while last night going through some of the propositions and their proofs with my 8-year-old son—I highly doubt he would have been interested or able to follow a traditional edition that used letters to refer to labelled points in a diagram.

It’s also surprisingly inexpensive—only $20! You can get a copy through Taschen’s website here.

In a similar vein, the publisher Kronecker Wallis decided to finish what Byrne started, creating a beautifully designed, artistic version of all 13 books of Euclid. (Byrne only did the first six books; I am actually not sure whether because that’s all he intended to do, or because that’s all he got around to.) Someday I would love to own a copy, but it costs 200€ (!) so I think I’m going to wait a bit…

3 Responses to The First Six Books of the Elements of Euclid, by Oliver Byrne (Taschen)