Everyone is probably familiar with the so-called “order of operations”, which is

a collection of rules that reflect conventions about which procedures to perform first in order to evaluate a given mathematical expression.

(the above quote is from the Wikipedia page on Order of Operations). If you grew up in the US, like me, you might have memorized the acronym PEMDAS; I have recently learned that people in other parts of the world use other acronyms, like BEDMAS. In any case, these mnemonics help you remember the order in which you should conventionally perform various arithmetic operations, right?

Makes sense, right? We did the stuff in parentheses first, then the exponent, then the multiplication and division (from left to right), then the addition.

OK, pop quiz: what is the value of

Of course it is

Another pop quiz: what is the value of 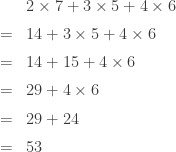 Easy peasy. But wait, did you notice what I did there? I did one of the additions before I did the last multiplication! According to the “order of operations” this is not allowed; you are supposed to perform multiplication before addition, right??

One more quiz: solve for

Of course we can proceed by subtracting

from both sides, resulting in

, and then dividing both sides by

is the unique solution.

How did we know not to add the

, resulting in the bogus equation

My point is this: casting the “order of operations” in performative terms—as in, the order we should perform the operations—is grossly misleading.

So what is it, really?

I made the title of this post provocative on purpose, but of course I am not actually arguing against the order of operations in and of itself. We certainly do need to agree on whether

. But we need a better way of explaining it than saying it is the “order in which we perform the operations”.

Any mathematical expression is fundamentally a tree, where each operation is a node in the tree with the things it operates on as subtrees. For example, consider the example expression

This tells us that at the very top level, the expression consists of an addition, specifically, the addition of the number

However, pretty much all the writing systems we humans have developed are linear, that is, they consist of a sequence of symbols one after the other. But when you go to write down a tree as a linear sequence of symbols you run into problems. For example, which tree does

Without further information there’s no way to tell; the expression

There are two ways to resolve such ambiguity. One is just to add parentheses around every operation. For example, when fully parenthesized, the example expression from before looks like this:

With one set of parentheses for every tree node, this is an unambiguous way to represent a tree as a linear sequence of symbols. For example, in the case of

, we would be forced to write either

, fully specifying which tree we mean.

But, of course, fully parenthesized expressions are quite tedious to read and write. This leads to the second method for resolving ambiguity: come up with some conventions that specify how to resolve ambiguity when it arises. For example, if we had a convention that says

has a higher precedence than (i.e. “comes before”, i.e. “binds tighter than”)

is no longer ambiguous: it must mean the left-hand tree (with the

at the top), and if we wanted the other tree we would have to use explicit parentheses, as in

I wouldn’t necessarily phrase it this way to a student, though. I have never taught elementary or middle school math, or whichever level it is where this is introduced, but I think if I did I would just tell them:

The order of operations tells us where to put parentheses.

The nice thing is that if you think about adding parentheses instead of performing operations, then the order of operations really does tell you what order to do things: first, add parentheses around any exponentiations; then add parentheses around any multiplications and divisions from left to right; finally, add parentheses around any additions and subtractions from left to right. Of course, if the expression already has any parentheses to begin with, you should leave them alone. This also explains what is “different” about the parentheses/brackets at the beginning of PEMDAS/BEDMAS: you can’t “perform” parentheses like you can “perform” the other operations. But from this new point of view, you don’t even need to include them in the mnemonic: they are different because the whole point is to add more of them. Of course, as students become familiar with this process, at some point they no longer need to actually write out all the parentheses, they can just do it in their heads.

To be honest I am not sure exactly what the takeaway should be here. I do think we are doing students a disservice by teaching them the misleading idea that the “order of operations” is about the order in which to perform the operations, and sadly it seems this idea is quite widespread. But I am not exactly sure what should be done about it. If you are a mathematics educator—either one who teaches students about the order of operations, or one who has witnessed the effects of their understanding on later subjects—I’d love to hear your responses and ideas!