Continuing from my previous post, we are in the middle of proving that

satisfies the same equation as

is the sum of all the

We had gotten as far as the following lemma:

In fact, this lemma is the only remaining piece of the proof: if we can prove this then we will have a complete proof that

The first proof will be by a combinatorial or counting argument, and was suggested in a comment by Andrey Mokhov. The idea is to match up the subsets in such a way that:

Since the subsets are in pairs and each pair has one even and one odd subset, the inescapable conclusion will be that there are the same number of even and odd subsets. For example, suppose there are a bunch of people in a room and you tell them to get into pairs where each pair has one person with a hat and one person without a hat. If they are able to do this exactly, with no unpaired people left over, then you know (without actually having to count people or hats!) that there must be an equal number of hatted and hatless people.

. Let’s first consider the case where

has an odd number of elements. How will we match up its subsets? That is, given some subset

, which other subset should

be matched with? A natural idea—which turns out to be the right one in this case—is to match

, that is, the subset of elements from

which are not in

. Since the complement of

again (and also because

cannot be its own complement), this does indeed put the subsets of

into pairs. Also, if

(and vice versa if

is odd). So each pair has one even and one odd subset.

A picture will probably help. Here’s an example where

. As you can check, each row in the picture is a pair of subsets which are each other’s complement, with one even subset and one odd subset: 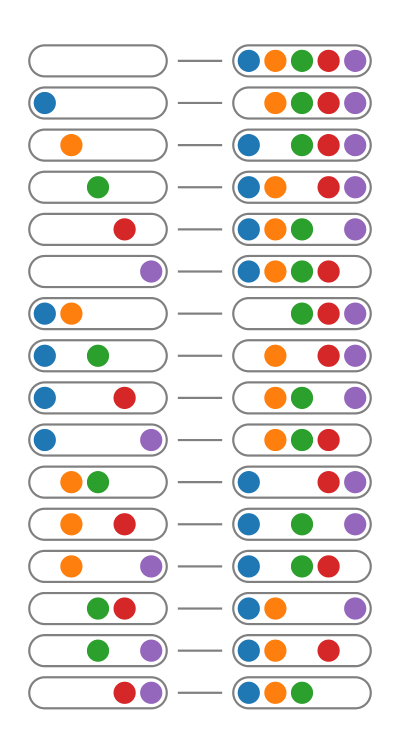 Now, what about if

doesn’t work anymore, since they have the same parity—both are even or both are odd. But we can use a cute trick to fix things. Pick some particular element

(note, this is the place in the proof where we depend on the assumption that

is nonempty!)—for example, we might pick the smallest element if they can be ordered, but it really doesn’t matter which one we pick. Previously, when complementing a subset

, we “flipped” the membership of each element of

is not an element of

, and vice versa. Now we do the same, except that we don’t flip

we keep it; if

we leave it out. But we still flip all the other elements. Here’s an example when

You can convince yourself that this does indeed match up all the subsets into pairs. Moreover, each pair has one even and one odd subset, because the sizes of the paired sets add up to an odd number:

if they don’t contain

And that’s it for the first proof! We’ve shown that any nonempty finite set has the same number of even and odd subsets, because we can always match them up perfectly.

And now for a small tangent. Remember that a set of size

is a binomial coefficient, or an entry in Pascal’s Triangle. Since we now know there are the same number of even and odd subsets, if we add

is even and subtract when

is odd, we must get zero:

That is, the alternating sum of each row of Pascal’s Triangle (besides the zeroth row) is 0:

and so on. As you can see, this is already really obvious for odd rows, for example,

, since equal numbers cancel out. This is why in some sense the proof was so easy for odd

: we just took the complement of each

. However, for even rows, such as

, it is not as obvious: why should we have

? So the proof for even

In any case, this discussion of binomial coefficiencts brings us to:

The second proof was hinted at in a comment by decourse. Recall the Binomial Theorem:

. Then the Binomial Theorem says that

And voila! The fact that this sum is zero is the same as saying that there are the same number of even and odd subsets. So we can see that the subset parity lemma is really just a special case of the Binomial Theorem. QED.

So, where are we? We’ve proved the subset parity lemma. But this means that

for even subsets and

(the sum of primitive

th roots of unity) since

satisfies the same equation. But it’s also a useful fact in its own right, will play an important role in our continuing exploration of the Möbius function