A few things about the images in my previous post that you may or may not have noticed:

The First Six Books of the Elements of Euclid, by Oliver Byrne (Taschen)

Recently for my birthday I received a copy of Oliver Byrne’s 1847 edition of Euclid’s Elements (pictured at right), republished by Taschen Books in 2010. I’ve only just started reading it, but it’s beautiful and fascinating. Oliver Byrne was a 19th-century civil engineer and mathematician, best known nowadays for this incredible “color-coded” edition of Euclid. Euclid’s Elements, of course, is the most successful and influential mathematics textbook of all time, widely used as a geometry textbook even up into early 1900’s. Nowadays hardly anyone reads the Elements itself, but its content and style is still widely emulated. In 1847, Oliver Byrne decided to make an English edition of the Elements that not only used colored illustrations, but actually used color-coded pictures of lines, angles, and so on, inline in the text itself to refer to the picture instead of using the traditional points labelled by letters (see the example below). I can’t imagine how much work went into designing and printing this in the mid-1800s. I guess there would have to be four engraved plates for every single page? In any case, it’s beautiful, creative, and surprisingly effective. I spent a while last night going through some of the propositions and their proofs with my 8-year-old son—I highly doubt he would have been interested or able to follow a traditional edition that used letters to refer to labelled points in a diagram.

It’s also surprisingly inexpensive—only $20! You can get a copy through Taschen’s website here.

In a similar vein, the publisher Kronecker Wallis decided to finish what Byrne started, creating a beautifully designed, artistic version of all 13 books of Euclid. (Byrne only did the first six books; I am actually not sure whether because that’s all he intended to do, or because that’s all he got around to.) Someday I would love to own a copy, but it costs 200€ (!) so I think I’m going to wait a bit…

do go no to

dodo
do go on
do no harm
do to others
go do likewise
go-go music
go no further
goto considered harmful
no can do
it’s a no go
a big no-no
say no to drugs
what to do
here or to go
to no avail
I don’t think we’re in Kansas anymore, Toto

[Disclosure of Material Connection: Princeton Press kindly provided me with a free review copy of this book. I was not required to write a positive review. The opinions expressed are my own.] 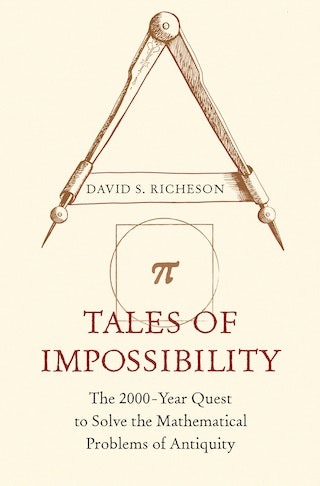 Let me get right to the point: this was hands-down my favorite math book that I read this year. If you don’t already have a copy, you should stop reading this post right now and go buy one! Go on, you’ll thank me. Need more convincing? Read on.

The book is focused around the four “problems of antiquity”: squaring the circle (i.e. constructing a square with the same area as a given circle), angle trisection, doubling the cube (constructing the side length of a cube double the volume of a given cube), and constructing regular

-gons. The “problem” of each is to carry out the required construction using only a compass and straightedge (a set of tools that is probably familiar to most readers from some point in their mathematical education). As Richeson so ably relates, these problems inspired all sorts of advances in mathematics over thousands of years—even though (because?) all were eventually proved impossible in general: Wantzel (angle trisection, doubling the cube, regular

-gons) and Lindemann (squaring the circle) gave the final, definitive proofs, but both built on top of a great deal of mathematics that came before them. Each new player in the story added layer upon layer of understanding over thousands of years.

First and foremost, I am amazed at the incredible amount of historical and mathematical background research that Richeson obviously did for this book, and the way he intertwines mathematics and history into a compelling story. Stereotypically, a book of mathematical history runs a double risk of being dry: too much unmotivated historical or mathematical detail can put anyone to sleep. Richeson deftly avoids this trap, and his book exudes human warmth. But it doesn’t skimp on details either; I learned a great deal of both history and mathematics. In many cases (such as with many of the purely geometric arguments) proofs are included in full detail. In other cases (such as in the discussion of irreducible polynomials), some mathematical details are omitted. Richeson has a good nose for sniffing out the most elegant way to present a proof, and also for knowing when to omit things that would bog down the story too much.

Alternating with the “regular” chapters, Richeson includes a number of “tangents”, each one a short, fascinating glimpse into some topic which is related to the previous chapter but isn’t strictly necessary for driving the story forward (e.g. toothpick constructions, Crockett Johnson, origami, the Indiana pi bill, computing digits of pi, the tau vs pi debate, etc.). Even though none of them are strictly necessary, taken as a whole these “tangent” chapters do a lot to round out the story and give a fuller sense of the many explorations inspired by the problems of antiquity.

In addition to the many mathematical and historical details I learned from the book, I also took away a more fundamental insight. I had always thought of “compass and straightedge” constructions as being rather arbitrary: these are the tools the Greeks happened to choose, and so now we are stuck in a rut of thinking about geometrical constructions using these tools—or so I thought. However, it turns out that they are not quite so arbitrary after all: there are many different sets of tools that lead to exactly the same set of constructible things (there is even some interesting history here, as mathematicians figured out what it should even mean to say that you can “construct the same things” with different tools, leading to definitions of constructible points and constructible numbers). For example, toothpicks, a straightedge and “rusty” compass, a straightedge and a single circle, a compass by itself, or a “thick” straightedge by itself (with two given starting points), all can perform exactly the same set of constructions as a traditional straightedge and compass. And as we learned in later centuries, the constructible numbers have a nice algebraic characterization as well: a point

is constructible with straightedge and compass if and only if

can be described using the four arithmetic operations and square roots. In other words, the set of constructible points seems to be a robust set that can be described in many equivalent ways; it is a more fundamental notion than the arbitrary-sounding description in terms of compass and straightedge would seem to imply. I don’t think I would have been able to understand this without someone like Richeson to do a lot of research and then put all the details together into a coherent story.

[It reminds me of a similar phenomenon with computation: for example, the description of a Turing machine seems rather arbitrary, and in some ways it is, but it turns out that many different models of computation (Turing machines, multi-tape Turing machines, lambda calculus, Post canonical systems, RAM machines…) all yield the same set of computable functions, and so the arbitrary-seeming choice is actually describing something more fundamental.]

In the same way, I thought the problems of antiquity themselves were somewhat arbitrary; but they were famous because they are hard, and it turns out they were hard precisely because they were really getting at the heart of some fundamentally deep ideas. So the fact that they inspired so much rich mathematics is no mere accident of history. One gets the sense that if we ever encounter intelligent life elsewhere in the universe, we may find that they struggled with the same mathematical problems—in very different forms, to be sure, but recognizably the same on a fundamental level.

Anyway, I’ve written more than enough at this point, and I think you get the idea: I thoroughly enjoyed this book, learned a lot from it, and highly recommend it!

English is so strange.

A simple proof of the quadratic formula

If you’re reading this blog you have probably memorized (or used to have memorized) the quadratic formula, which can be used to solve quadratic equations of the form

My colleague Gabe Ferrer recently brought to my attention a remarkable new paper by Po-Shen Loh, A Simple Proof of the Quadratic Formula. This paper is remarkable for several reasons: first of all, it’s remarkable that anyone could discover anything new about the quadratic formula; it’s also remarkable for a research mathematician to publish something about elementary mathematics. (But Po-Shen Loh is not your average research mathematician either; he does lots of really cool work making mathematics more accessible for all kinds of learners.) I’m going to explain the basic idea but I highly recommend actually reading the paper, which not only explains the ideas but also does a great job putting everything in proper historical context. Loh has also made a whole web page dedicated to explaining the ideas, with a video, worked examples, etc.; it’s definitely worth taking a look!

Suppose we have a quadratic equation we want to solve,

has a coefficient of

. (If we have a quadratic equation with some other coefficient

, we can always divide everything by

Now imagine we knew how to factor the quadratic. Then we could rewrite the equation into the form

which would imply that

are the two solutions. If we multiply out the above factorization (using, you know, “FOIL”), we get

which means we’re looking for values

and whose sum is

So far, so good; everyone learns this much in high school algebra. The way one usually goes about factoring quadratic polynomials is to make informed guesses for values of

and check whether their sum and product give the right coefficients.

The key insight at this point, however, is that we don’t actually have to guess! Starting from

, let’s divide both sides by

The left-hand side is the average of

, which lies halfway in between them on the number line. Let’s use

to denote the distance from

is halfway in between

must also be the distance from

. So we can write

Now, we know their product has to be

, and multiplying them is particularly easy because we get a difference of squares:

to one side of the equation by itself and take the square root:

That means the solutions are

If you like, you can use the same method starting from

to derive the usual quadratic formula including an arbitrary value of

, although the required algebra gets a bit messier.

Using it in practice

, so there’s no need to memorize a formula at all:

Of course if you need to solve something of the form

, you can add an extra step to divide through by

And that’s it! I really hope this new method will make its way into classrooms around the world; Loh makes the argument (and I agree) that it really is much easier for early algebra learners to grasp. And again, I really encourage you to go look at Loh’s web page to read more, especially about the historical context: at what point in human history could someone have come up with this idea? And why didn’t they? (Or if they did, why did we forget?) All this and more are in the original paper, which is a really fascinating and accessible read.